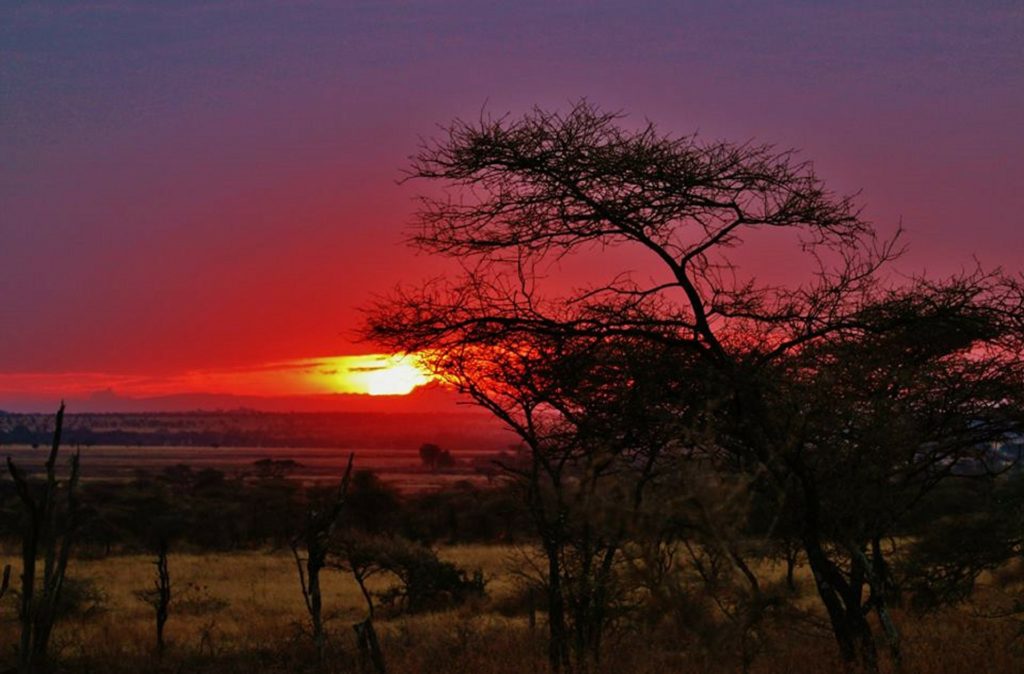 The vast grasslands of the renowned Serengeti National Park provide what many consider to be the quintessential African game viewing experience. Meaning ‘endless plains’ in the language of the Maasai, this land of immense open spaces is home to literally millions of large herbivores, as well as the accompanying carnivores. The Serengeti is renowned for having the largest concentration of migratory animals in the world and is also famous for its large lion population.

The Serengeti National Park forms part of a huge conservation area, encompassing the adjacent Ngorongoro Conservation Area, as well as the Masai Mara National Reserve in Kenya. With no fences or man-made barriers, huge numbers of wildlife move freely throughout this area.

The Serengeti and the adjacent Masai Mara are best known for hosting the annual Great Migration of wildebeest, during which almost two million animals move across the plains and woodlands. Often called the greatest wildlife spectacle on earth, this dramatic event is triggered by annual rainfall patterns that determine the availability of grazing.

Tens of thousands of animals follow the seasonal rains, fording both the Grumeti and Mara Rivers in their search for fresh pastures, giving birth to their young en route The Serengeti is home to literally millions of large herbivores, as well as the accompanying carnivores and prolific birdlife.

The Park boasts more than 35 species of plains-dwelling mammals and is renowned for its annual wildebeest migration. Almost two million wildebeest, zebra, eland and Thomson’s gazelle follow the annual rains through the Serengeti to the adjacent Masai Mara National Reserve in Kenya in search of prime grazing. As the dense herds of herbivores move across the plains, they are shadowed by predators and scavengers. 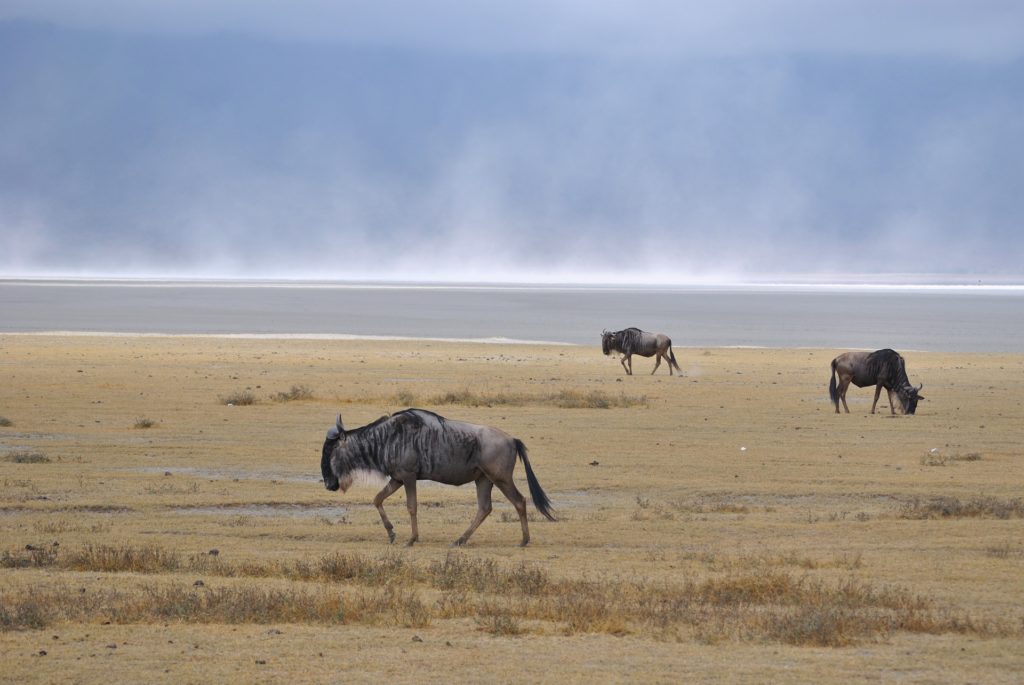 The Ngorongoro Crater is a natural amphitheatre created about 2 million years ago when the cone of a volcano collapsed into itself, leaving a 100 square mile (259km²) caldron-like cavity. This caldera, protected by a circular unbroken 2,000-foot high rim (610-metres), contains everything necessary for Africa’s wildlife to exist and thrive.

The Ngorongoro Conservation Area is a pioneering experiment in multi-purpose land use where people (the Maasai), their livestock and wildlife coexist and share the same protected habitat. Wild animals are protected as in the National Parks.
The craters of Ngorongoro and Empakai are reserved exclusively for wildlife, while the rest of the Conservation Area is shared by wildlife, people and livestock. The Maasai, the main residents of Ngorongoro, are pastoralists who move widely with their herds of cattle, sheep, goat and donkeys in search of pasture and water. In recent years the Maasai have been encouraged to work on the land and supplement their traditional diet of milk, blood and meat.

The Ngorongoro Crater, which is the central attraction in the area, is the largest Caldera in the world that has its walls intact. The Ngorongoro Crater floor, a sheer drop of 610 meters below the crater rim, has an area of 265 sq. km, with a diameter of 19 km. The sight of the Ngorongoro Crater is simply stunning.
The crater floor is covered with plains animals, including wildebeest, zebra, gazelles, elands, rhino, and a large predator population of lions, hyena and jackal which can all be viewed at close quarters. Cheetah and leopard can also be seen here.

The rainy season is between November and May. The altitude at the crater rim is about 2286 meters above sea level, and temperatures can get quite chilly in the evening. An estimated 4 hours’ drive from Arusha. Approximately 190 km from Arusha town and approximately 245 km from Kilimanjaro International Airport. 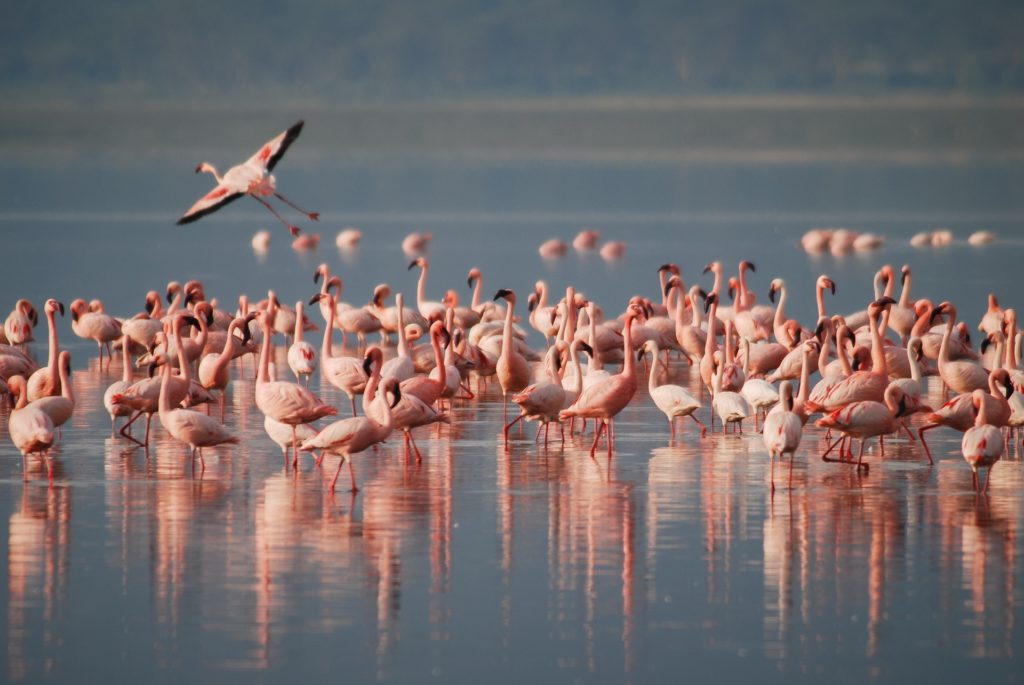 Lake Manyara National Park is a tiny piece of conservation area tucked between the 600 meters high, red and brown cliffs of the Western Rift Valley escarpment and an ancient soda lake that protects the entire eastern border.

Two-thirds of the park is water, with the rest forming one of the country’s most diverse terrestrial offerings – grassy floodplains that blend into thick acacia woodland and then finally a selection of forest (complete with jungle soundtrack courtesy of resident hornbills).

Manyara is famous for the pride of lions within its borders that have taken to spending much of their time up trees – the “tree-climbing lions of Manyara”, and has good elephant and other large mammal sightings during the dry season – the park is famous for its elephant and lays claim to the country’s densest populations of both the aforementioned giant and that of buffalo.

Whilst big game viewing is best during the dry season, Manyara is similarly spectacular during the wet season (November to June); some of the best birding in the country can be found in Lake Manyara National Park – thousands of red-billed quelea perform their choreographed sky dances over the park’s hot spring and alkaline waters, pelicans, cormorants and thousands of flamingos reside in the colourful waters and it’s quite possible to see over 90 other species in a single day. Waterfalls and fauna are also best at this time of the year, making it a very scenic visit.

Often used as a day-stop by tour operators on longer itineraries (some of the less common species not frequently seen on the Serengeti or other park of the Northern Circuit hide here), Lake Manyara has recently started providing facilities for single day or longer activities: canoeing on the lake, mountain biking or abseiling down the escarpment and micro lighting. Local guides also provide forest and village walks in areas outside the park.

Accessed from Arusha by a two-hour drive, Manyara is primarily accessed in the north, near the local village of Mto Wa Mbu. It’s said to be the country’s only place where as many as 120 native tribes are represented – the local curio market is a good place to pick up trinkets for this very reason. Translated to “river of mosquitoes”, it goes without saying that you’ll need insect repellent if you’re staying overnight! Accommodation within the park is scarce, although there are good offerings nearby. 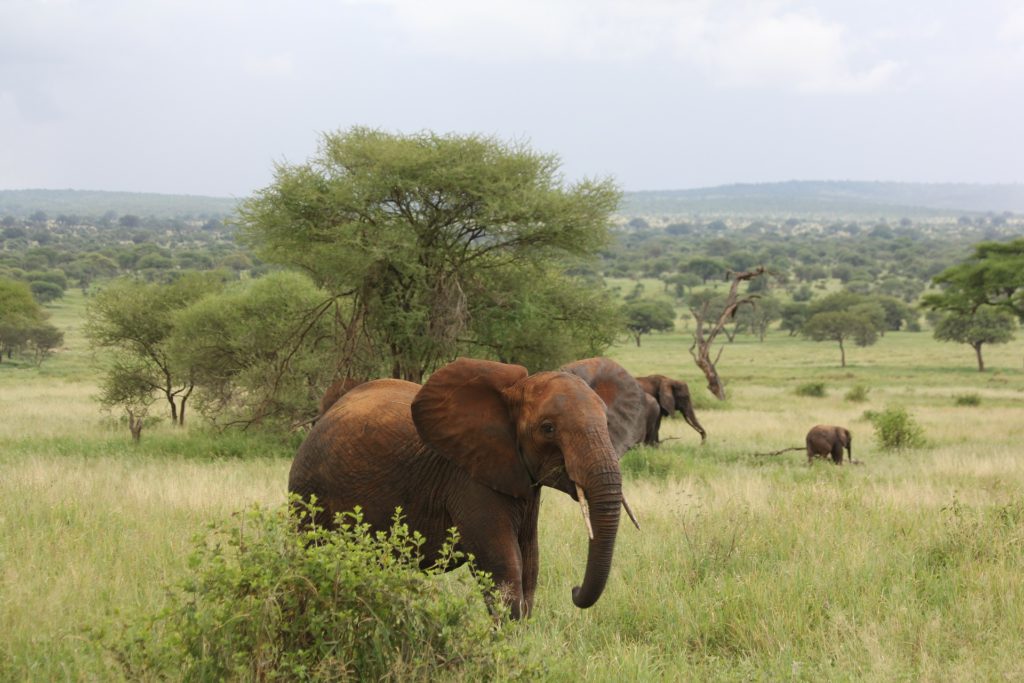 It lies a little distance to the south-east of Lake Manyara and covers an area of approximately 2,850 square kilometres (1,100 square miles.) The landscape and vegetation are incredibly diverse with a mix that is not found anywhere else in the northern safari circuit. The hilly landscape is dotted with vast numbers of Baobab trees, dense bush and high grasses.

The usual mix of wildebeest, zebra, buffalo, giraffe, impala and eland inhabit the park and support a full house of predatory animals, although they’re less used to human presence in this wilder park and are therefore slightly harder to find. 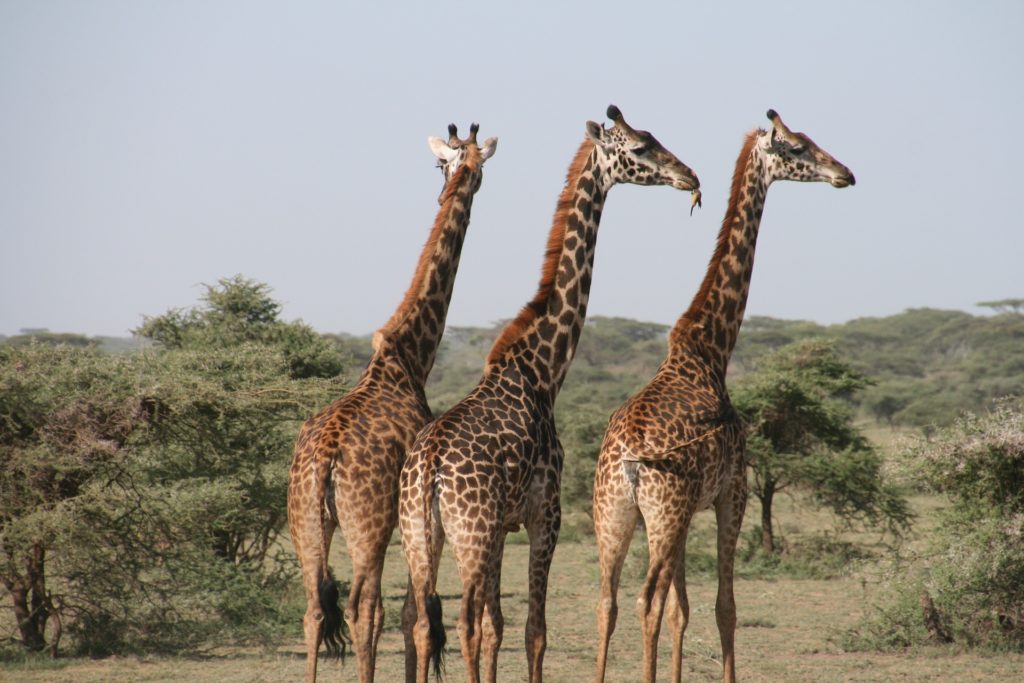 The Selous Game Reserve, with an area of about 55,000 sq. km is the largest well-watered wildlife sanctuary in Africa, and one of the largest protected areas in the world. Its size is simply stunning, bigger than Switzerland, uninhabited and little touched by human interference. It is perhaps the most pristine wilderness still remaining in Africa, with a wide variety of wildlife habitats, including open grasslands, Acacia and miombo woodlands, swamps and riverine forests in the many tributaries of the mighty Rufiji River which flows through the reserve. Due to its unique ecological importance, it was designated a World Heritage Site by the United Nations in 1982.

Its wildlife is spectacular, with some of its mammal and reptile populations are the largest in Africa, namely buffaloes, elephants, hippos, wild dogs and crocodiles. Other wildlife includes the wildebeest, impala, waterbuck, zebra, eland, the greater kudu, sable antelopes, giraffe, baboon, the vervet and blue monkeys, and the black and white Colobus monkey which can be seen in certain riverine forests moving from tree to tree in family groups. There is a large population of predators including lions, leopards, cheetah and the spotted hyena, and about 440 species of birds in the Selous, of both resident and migratory birds.

Named after Captain Frederick Courtney Selous, a legendary 19th-century naturalist, explorer and hunter, Selous Game Reserve was founded in 1905. It is situated in the southern part Tanzania, bordered by Mikumi National Park to the northwest and by the Udzungwa Mountains National Park and Kibasira Swamp to the west.
The greater part of northern Selous is reserved for photographic safaris and it is one of the most beautiful and game rich areas in the whole ecosystem. The Selous wilderness meets the kind of dream visitors have of Africa of the early European explorers like Dr Livingstone and Henry Stanley.

The Reserve offers a wider variety of game viewing opportunities to the visitor, including the thrilling experience of a foot safari through game inhabited bushes in the company of an armed ranger. The many waterways in the Reserve provide an excellent natural setting for boat safaris, both for game viewing and bird watching. This is in addition to the game drives in 4X4 motor vehicles which, combined with a boat and walking safaris, offer an exciting and richer game viewing itinerary unique to the Selous Game Reserve. It’s accessible by Road or by air. Scheduled charters are available from Dare salaam. 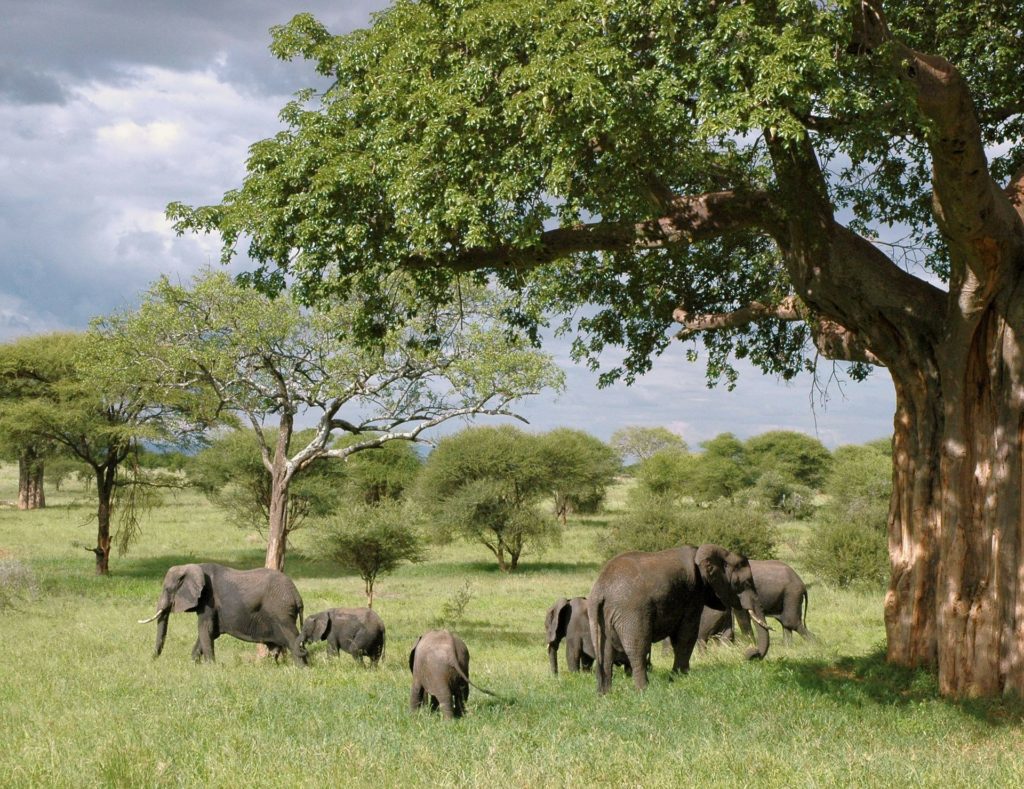 Ruaha national park is one of the few Tanzania’s famous wilderness areas where one can have a rare experience of game viewing spiced up by the fascinating landscape. The park is rich in plants and animals such as Greater Kudu (Tragelaphus strepsiceros) which cannot be found in any other national park. The park boasts of her almost untouched and unexplored ecosystem, making visitors safari experience very unique.

The Great Ruaha River as other rivers like Mwagusi, Jongomero and Mzombe save as the lifeline of the park. During the dry season, these rivers become mostly the main source of water for wildlife. There are few natural springs saving the same purpose.

Discover the biggest tourist attractions in Tanzania such as national parks and game reserves. Contact us to enquire. 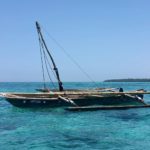