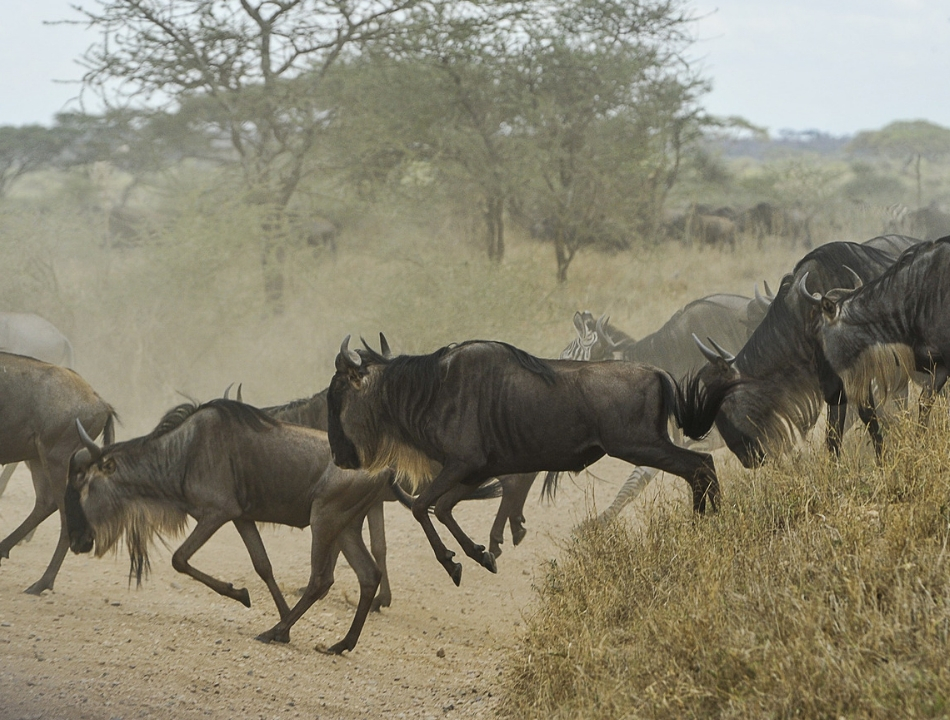 No doubt, one of the natural wonders of the world, Africa’s great migration offers a unique wildlife experience that no photos or words can do justice to. The key players in this almost 2000-kilometer odyssey are the wildebeest — around 1.5 million of them, along with gazelles and zebra traversing the veld of eastern Africa every year. These massive herds constitute the largest land mammal migration on Earth.  Check out our video and get a glimpse of the Great Migration tour experience!

The incredible event takes place across acres of woodlands, open plains, and a wilderness that includes Tanzania‘s famous Serengeti national park and Kenya’s Masai Mara game reserve. Picture the breathtaking spectacle of hundreds of thousands of animals kicking up a dusty trail across endless rolling hills and crocodile-infested rivers. If witnessing this dramatic journey is on your bucket list this year, here’s everything you need to know.

The majority of the dramatic exciting and breathtaking view of the migration of the wildebeest takes place in the Serengeti and usually from about January to March, they are found in the southern Serengeti while from April to May, they migrate to the central Serengeti moving continuously through the north and west in June and July, and from August to October they cross into Kenya’s Masai Mara national reserve and by November and December, they are back to the Serengeti and this cycle is repeated continuously over and over again over the years.

Known for its abundance of wildlife, and high biodiversity, the Serengeti covers over 9000 kilometers of grassland plains, woodlands, forest and savanna. It stands out as one of the driving forces of Tanzania’s tourism industry, providing a major attraction to the northern safari circuit encompassing lake Manyara national park, Arusha and Tarangire national parks, and the Ngorongoro conservation area.

This Tanzanian park in the Serengeti ecosystem, bordered by Kenya to the north where it is nonstop with the Masai Mara national reserve, Ngorongoro conservation area to the southeast, Ikorongo and Grumeti game reserves to the west and to the east and northeast lies the Loliondo game controlled area, all together forming the larger Serengeti ecosystem which is divided into five regions:

There’s never a dull moment in the Serengeti with each region offering unrivaled adventure and unique encounters with some of the most stunning creatures on the planet. A host of other animals can be found including the big five which are lions, African bush elephants, eastern black rhinoceros, African leopards and the African buffalos.

The rainy season is what sets the Great Migration in motion, dictating where the herds will be at different times of the year. January to March marks the season for heavy rains in the Serengeti, which in turn ushers in the calving season, where the animals give birth to hundreds of thousands of calves as the rains transform the landscape into beautiful green pastures. Game viewing is a bit of a challenge during this period due to the increased vegetation.

The months of April, May, and June see a vast multitude of wildebeests, zebras, gazelles, and elands milling around the south of the Grumeti River, at the Western Corridor of the Serengeti.

This is the most remote part of the Serengeti and is defined by the rivers Grumeti and the Mbalageti, which make the area ideal for grazing.

In fact, thanks to these rivers, a sizeable resident wildebeest population does not migrate, remaining here year-round. When the Mbalageti River becomes dry, the animals, including buffalos and hippopotamus simply flock to the Grumeti River, which retains several pools enough to sustain them till the next rainy season.

This region is also a wide hunting ground for predators — lions, cheetahs, leopards, hyena, and giant Nile crocodiles looking for easy prey made abundant by the migration.

Travelers wishing to see the migration from this location will have to visit between the months of May through to July.

Home to enormous migratory herds from July to November, the Northern Serengeti is a relatively unexplored wilderness packed with stunning landscapes and abundant wildlife. A migration safari here offers exceptional and dramatic sightings of wildebeest and zebras as they make the hazardous journey across the Mara river into the Masai Mara region.

Here, it is not just the crocodiles that the animals are wary of, but also the deep torrential flow of the river itself. It is often a dramatic scene as the river takes an enormous toll on the exhausted and terrified wild cattle, drowning some and returning some others to the same side of the river allowing the cycle to repeat itself.

The Northern Serengeti also supports an abundance of resident wildlife including lion, hippo, elephant, giraffe, and the rare oribi antelope. And the next year, this natural circle of life begins again.

The Northern Serengeti does not receive as many crowds as its southern and central counterparts. This is mainly due to long travel times.

Nevertheless, for those willing to make the journey, the tour is worth it as the area boasts some of the most varied and beautiful landscapes in the whole of the Serengeti.

The trip is worth it as the Northern Serengeti’s landscapes are varied and beautiful and it is home to exciting wildlife.

Unlike the other parts of the Serengeti that are seasonal only visited during the migration months, the central area is full of animals pretty much year round.

This area, also called Seronera, is home to a vast range of different ecosystems, which would explain why many animals have chosen to simply settle here instead of chasing the rain and following the herds. From perpetual grasslands to acacia and baobab forests and riverine areas, Seronera is the heartbeat of the Serengeti, giving visitors a high chance of seeing wildlife in the least amount of time.

If you are here to witness the Great Migration, however, the best time to visit is in the months of April and November when the herd is most likely to pass through en masse.

The beautiful Seronera River helps maintain the various ecosystems and boasts one of the highest densities of leopards and other predators on the planet.

In addition to the fantastic wildlife scene, there are also several activities for visitors to enjoy in the Central Serengeti, including the famous hot air balloon flight where tourists can take in all the wonders of the natural environment and the Great Migration from a whole new perspective.

Definitely one of those must-do activities for any tourist looking to top off their African safari adventure in style.

In the local Masai language, Serengeti loosely translates to “endless plains” and many argue that it is the seemingly boundless stretch of short grass plains adorning the Southern Serengeti that was the inspiration for the name.

It is the most accessible area of the Serengeti and stretches from the Seronera all the way to the Ngorongoro Conservation Area. Thanks to these open plains, game viewing is usually exceptional, especially for travelers who arrive at the right time of year.

Visitors expecting to catch a glimpse of the Great Migration from this area usually troop in from December to March, which is when the wildebeest herd begins to grow and congregate around Lake Ndutu.

This lake nourishes the surrounding lush plains and serves as the perfect backdrop for the calving season in which hundreds of thousands of calves are born over a 3 week period thereby increasing the ranks of the already huge herds. This calving season usually occurs in February.

Naturally, this congregation attracts the many predators of the Serengeti ecosystem so you are likely to spot lions and cheetahs watching the herds from afar. The Southern Serengeti is also home to huge flocks of pink flamingos.

Kenya’s part in the famous Great Migration starts around July when the now exhausted animals reach the Mara River from The Serengeti in Tanzania. This fast flowing river is filled with large hungry crocodiles lying in wait, and a sea of tourists on the opposite bank waiting to witness this magnificent, albeit blood-thirsty, river crossing.

Usually, it is a long wait as the hundreds of thousands of frantic wildebeest gather on the river banks, gazing longingly at the green grass on the other side.

Knowing what awaits them in the turbulent waters, not one animal will make a move until one brave wildebeest takes the plunge and then they will all follow. The animals that are able to get past the crocodiles and make it to the other side are treated to the lush green grazing grass across the vast plains of the Masai Mara.

Travelers looking to come to Kenya to witness this extraordinary event need to book early as this is the most popular time for visitors.

The rains tend to cease fully from April to May, which prompts the herd to begin migrating northward towards the Masai Mara.  July to October is usually the ideal time to catch the show in Kenya as the receding vegetation and drying waterholes expose both the herds and the predators, from around 3000 Serengeti lions to cheetahs, hyenas, leopards, and monster crocodiles.

Keep in mind that this season is the busiest and most expensive time of year for a Great Migration safari with crowds of tourists waiting to catch a glimpse of the extraordinary sights of the wildebeest crossings at the Grumeti River in Tanzania and the Mara river in Kenya.

When the dry season sets in, usually by end of October or early November, the herd begins their return to the wetter Serengeti plains and arrive just in time for another calving season. It truly is a wondrous spectacle!

The Great Migration isn’t just some ephemeral event set against some of the most stunning landscapes in Africa — it is one of those trips that everyone should experience in their lifetime. Several travelers have labeled it a life-changing experience. Whether it’s from the back of a jeep or from the lofty vantage point of a hot air balloon, seeing the vast herds on the move is an unforgettable experience that doesn’t just bring you closer to nature, but also provides an opportunity to witness a seething mass of life and beauty that does not occur anywhere else on the planet.

There are several package tours to choose from depending on your budget and style. Some tour operators even offer a custom safari itinerary to suit your preferences. Accommodation options vary from safari lodges and tented bush camps to mobile camping safaris that move wherever the migration is so you can enjoy greater freedom when deciding how to spend each day.

It is best to book your Great Migration safari eight to twelve months in advance. Doing so will, of course, require proper planning, but it will save you money and accommodation hassles down the line. Visitors are advised to pack binoculars, cameras, walking boots, bush hat, sunscreen, and warm clothes for those early mornings and nighttime game drives. If you’re unsure as to where to begin, simply contact us here and we’ll be happy to provide the necessary assistance. This is a once in a lifetime experience and every effort made to witness this wonder of the natural world is worth it a hundred fold. Don’t miss out!

Check out our 2019 Great Migration Packages: