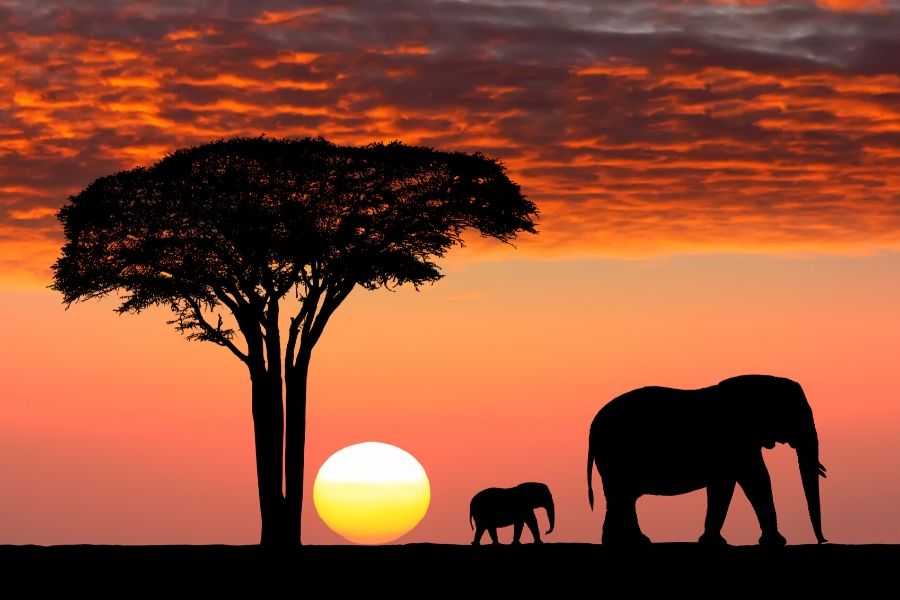 If this is your first time planning an East African safari and you are trying to decide where to go, then you’re probably torn between Kenya and Tanzania. Both countries offer unparalleled safari experiences and fantastic game viewing, so how do you know which one to choose? Let’s take a look at their similarities and unique differences so you can then decide which country best suits your travel preferences. 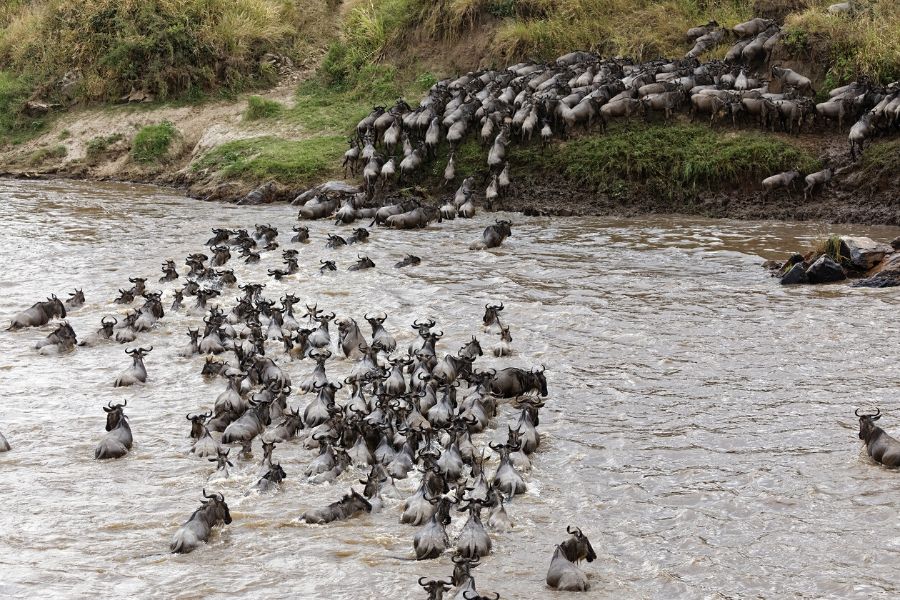 Kenya and Tanzania and quite similar to each other in that they share the same language (Swahili), they were both formerly governed by the British, and are both key players in East African tourism. Both countries share a cordial relationship and do a good bit of trading with each other. They also share a common border, which means their climates are not too different — the average temperature in the summer is 28 degrees C while they get coldest in July when it sits around 24 degrees C.

In terms of safari parks and wildlife populations, you are guaranteed a one of a kind experience in either location. You can spot the big five and other large animals, as well as hundreds of bird species that typically migrate across both countries. Kenya and Tanzania are also the only two countries on earth to host the Great Migration, a yearly wildlife spectacle comprising millions of wildebeests, gazelles, and zebras on their journey to greener pastures.

Based on tourism receipts for the last few years, however, Tanzania has been the leading regional destination and far outpaced Kenya in earnings, with revenues amounting to $2.28 billion in 2017, while Kenya earned $1.56 billion in the same year.

Bordered to the north by Somalia and Tanzania to the south, Kenya is located East of Africa and it also shares its borders with the Indian Ocean, South Sudan, Uganda, and Ethiopia. Kenya is well renowned as the original safari destination and remains undoubtedly one of the best places in Africa to spot wildlife. It also boasts one of the most stunning coastlines hugging the vast Indian Ocean on its coast, so visitors can always include a trip to its pearly white-sand beaches right after exploring the African bush.

Tanzania on the other hand, more than any other destination is indeed the land of safaris. The big cats are easy to see and all members of the Big Five can be spotted at various Tanzanian parks and reserves. There are unparalleled opportunities to experience the natural wealth Tanzania boasts and its Indian ocean is magical, with peaceful islands and coastal villages steeped in centuries of Swahili culture. Explore the Ngorongoro and Serengeti National Park where elephants wander along seasonal migration routes, chimpanzees swing through the treetops, wildebeest stampede across the plains, and hippos jostle for space in the muddy waters. Tanzania is also home to Africa’s highest peak (Kilimanjaro). 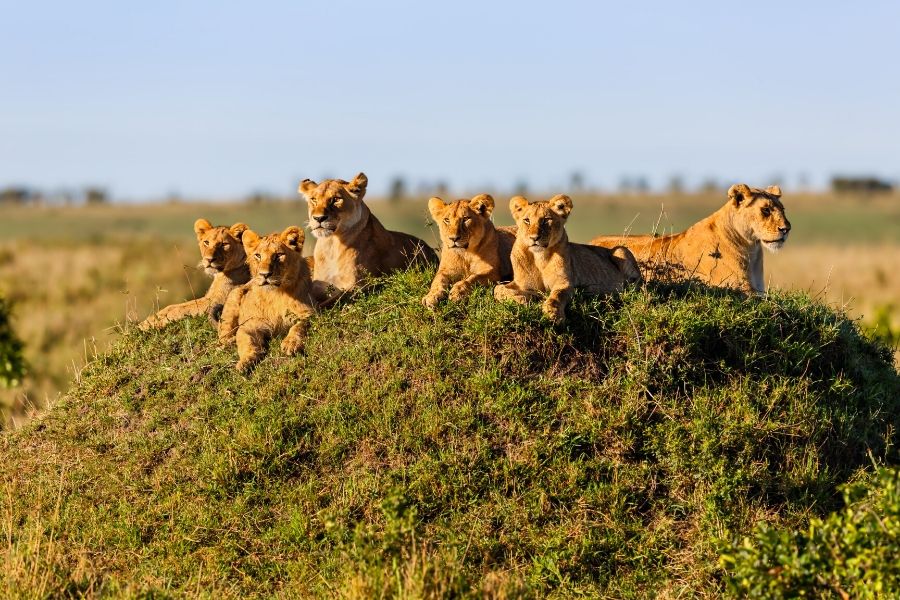 Along with an unfenced border shared with Tanzania’s Serengeti National Park, the Masai Mara in Kenya is often considered to be Africa’s premier safari destination. Despite its small size, the Masai Mara is home to an astounding concentration of animals and birdlife. Catching a glimpse of the Big Five is almost guaranteed, while cheetah, smaller felines, spotted hyenas, waterbuck, gazelle, wildebeest, and zebra abound. Birders can spot over 450 recorded avian species and its park rivers are home to hippos and crocodiles. The topi, zebra, wildebeest, Thompson and Grant’s gazelle migrate into and occupy the Mara reserve from its neighboring Serengeti plains to the south and Loita plains in the pastoral ranch to the northeast.

Dubbed as one of the best reserves in Africa to view large crowds of elephants up close and spot over 600 species of birds, Amboseli National Reserve is one of Kenya’s most popular tourist parks. Its name comes from a Maasai word meaning “salty dust”, a perfect description of the park’s parched conditions. The five different habitats in Amboseli, ranging from the dried-up bed of Lake Amboseli to the wetlands with sulfur springs, savannah, and woodlands can be enjoyed by nature-lovers. Big cats such as lions, cheetah, as well as giraffe, impala, eland, waterbuck, gazelle and more are commonly spotted. 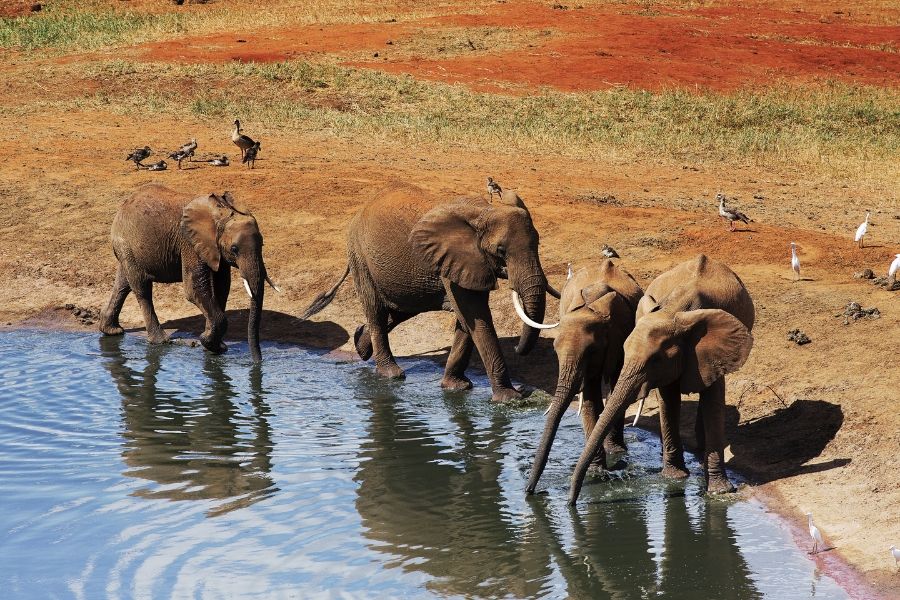 Together, Tsavo West and Tsavo East National Park are Kenya’s largest park, comprising 4% of the country’s total area and encompass rivers, waterfalls, savannah, volcanic hills, a massive lava-rock plateau, and an impressive diversity of wildlife. Tsavo East is well known for its photo-worthy sightings of large herds of elephants bathing and rolling in the red dust. The palm-fringed Galana river provides excellent game viewing and a lush counterpoint to the arid plains. Other highlights in Tsavo East include the world’s longest lava flow, Mundana Rock, Yatta Plateau, and the Lugard Falls. Tsavo West, however, is topographically more varied and wetter. It boasts some of the most beautiful scenery in the northern reaches of the park and highlights include Mzima Spring, Chaima Crater, and Ngulia Rhino Sanctuary.

Established in 1961 with more than 450 species of birds recorded plus a rich diversity of wildlife, Lake Nakuru National Park is famous for its huge flocks of pink flamingos. Landscapes range from sweeping grasslands bordering the lake to rocky cliffs and woodland and you can also spot lions, warthogs, leopards, waterbucks, pythons, and white rhinos. 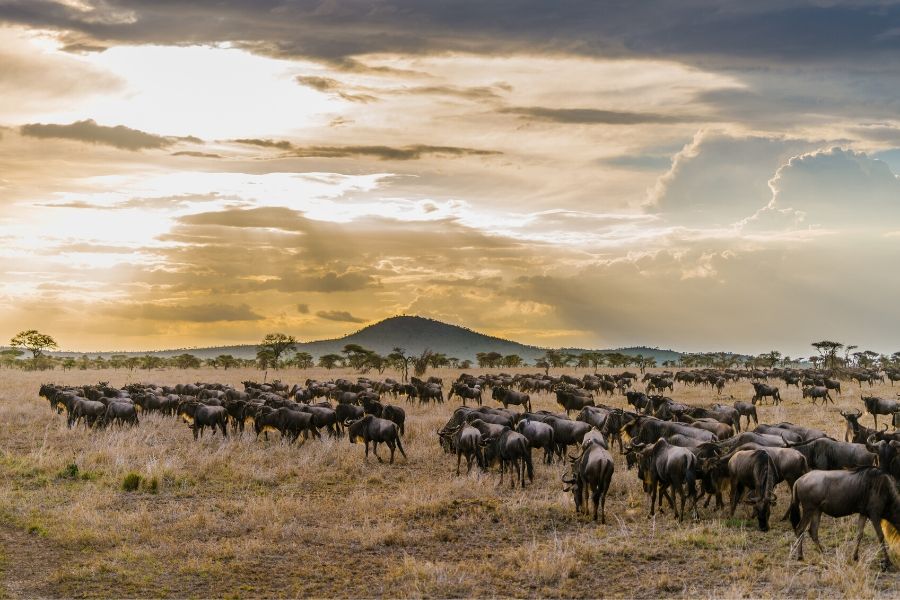 Famous for the Great annual migration, the Serengeti National Park is the second-largest park in Tanzania. A vast treeless plain with millions of animals dwelling here or passing through in search of fresh grasslands, first-timers can also catch a glimpse of the Big Five and nearly over 500 species of birds that have been recorded here. The Serengeti is known for its abundance of wildlife and high biodiversity. The migratory wildebeest which number 1.5 million individuals constitute the largest population of mammals that still roam the planet. They are joined by the zebra, 200,000, and Thompson and Grant’s gazelle, 300,000, including tens of thousands of topi and coke hartebeest, Masai giraffe, waterbuck, impala, warthogs, and hippos.

Situated between Lake Manyara and the Serengeti, the Ngorongoro Conservation Area is one of Tanzania’s most popular wildlife viewing areas and is home to the famous volcanic Ngorongoro Crater. This famous huge volcanic crater has a permanent supply of water which draws thousands of animals. Tourists visit here in their numbers primarily for viewing large animals and birdwatching. Animals that can be spotted here are by the thousands and they include lions, elephants, buffalos, Thompson’s gazelle, wildebeest, and zebra. 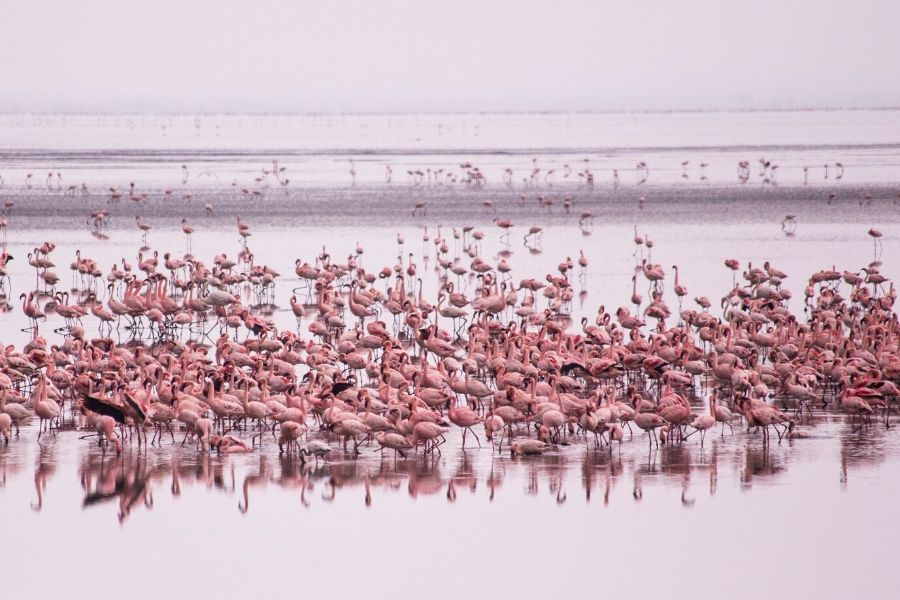 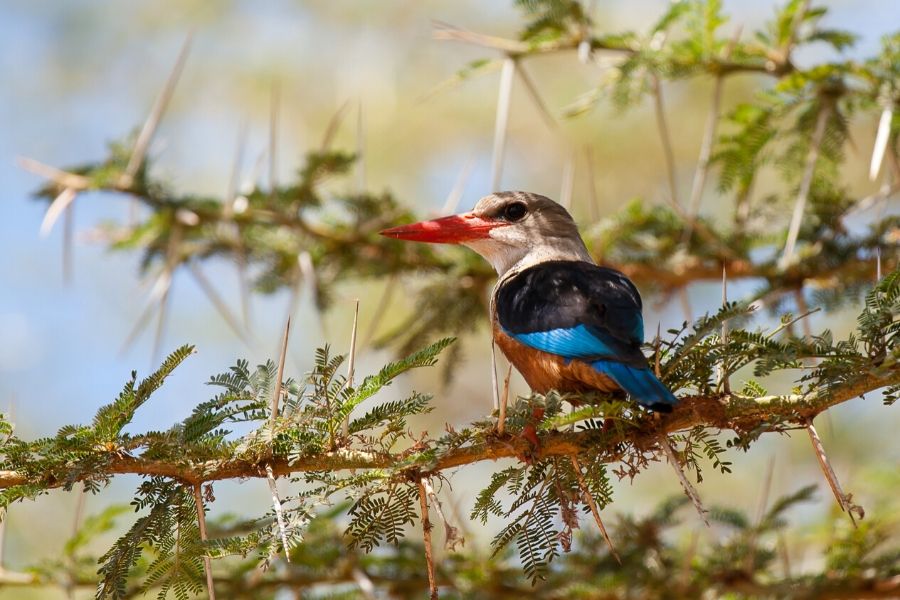 The average 5-day safari in Tanzania costs around $2500 per person for budget range, while midrange safaris can go for around $3000 per person and Luxury safaris as high as $3800. Group rates are generally cheaper, going as low as $1,300 per person for a 4-6-people group on a budget tour.

Single visa entry for a maximum duration of 90 days costs around $50 – $60. Multiple entry visa for Kenya costs $101 while multiple-entry business visa valid for 6 months in Tanzania costs $ 1100. First-timers can also apply for an E-visa online which is the simplest and fastest way to get your visa. Flight cost to Kenya ranges from $400 to $600, while flight cost to Tanzania ranges from $575 to $900. 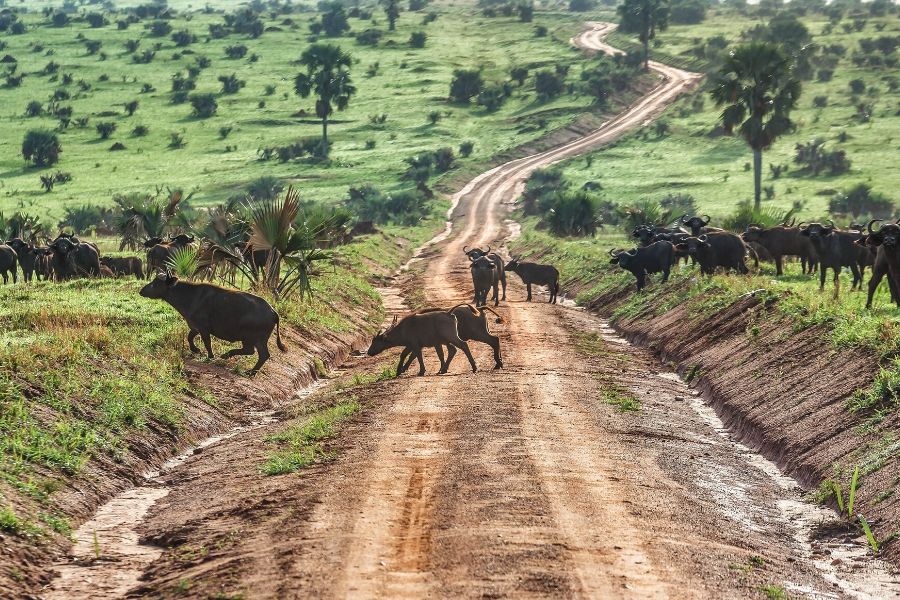 Kenya and Tanzania are both great destinations in terms of wildlife density and family friendliness. Depending on the factors discussed above and their importance to your travel preferences, you can then make an informed decision. Kenya is generally cheaper (nearer to the city you want to visit) with more convenient travel between parks and group joining safaris. On the other hand, if you are looking to see the great migration in a huge National Park or simply want to be far removed from the cities and enjoy a more authentic outdoor experience, then Tanzania is the way to go.